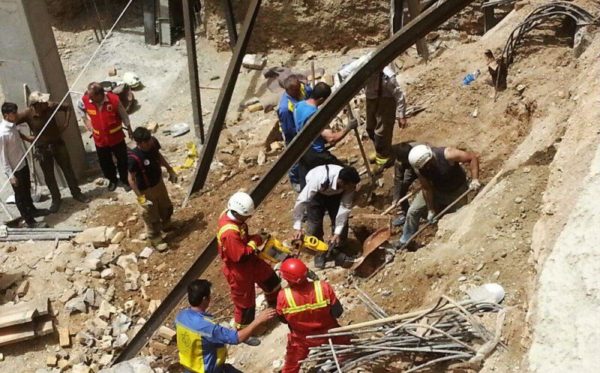 Falling from height is announced to be the number one cause of work-related fatalities in Iran, while the second cause is being hit by a hard object. Electric shock, burning, drowning, deflagration, poisoning, and asphyxiation are among other common causes of work-related accidents leading to death.

Data published by the Ministry of Labour and Social Affairs of Iran and the ILMO show that an average of 1500 Iranian workers die every year due to work-related accidents.

In the last decade in Iran, about 16000 workers have lost their lives as a result of work-related accidents. These data only include the registered and regulated workplaces that have more than 10 workers. Under Iranian law, workplaces with less than 10 employees are exempt from some of the requirements of the labour law including providing workers with insurance.

The Ministry of Labour and Social Affairs statistics show there are at least six million unregistered workers in Iran and thousands of them are Afghan and foreign workers.

The International Labour Organization (ILO) has asked Iran to provide an explanation for the high rate of work-related accidents and the increasing number of fatalities of workers.

Labour activist, Alireza (Behruz) Navaei said, in addition to the official numbers of work-related fatalities, there are other deaths due to a lack of safety and health issues at workplaces. “The number of health and safety-related deaths in workplaces is sixfold,” Navai told Zamaneh.

Lack of training, lack of safety equipment, long shifts, companies’ failure to comply with safety guidelines and lack of regular safety inspections are the main reasons contributing to high rates of work-related fatalities.

In the year of 2014, according to data published by ILMO, the number of work-related accidents resulting in death in Iran was eight times more than the average rate.

The ILO estimates that some 2.3 million women and men around the world die as a result of work-related accidents or diseases every year.

Living in Cars; a new Phenomenon in Tehran

Encyclopedia Iranica “A real tour de force” is in Peril