Tehran police forcefully dispersed a crowd of cyclists who had gathered in Tehran’s Laleh park for a weekly gathering of the Tuesdays: No Car Day. 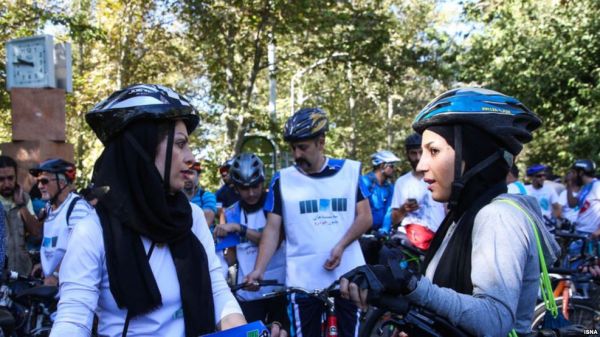 On 6 Sept, Tehran police prevented green campaigners from holding a group ride in Tehran. Javad Heydariyan, reporting from Tehran says that the police’s action were despite the fact that some government officials were also among the mixed gender crowd.

The police has said that the Clean Tuesday Project – a No Car Day campaign – have not coordinated their event with the Municipal Security Council.

The Clean Tuesday Project events in Iran have become controversial mainly because women are amongst the cyclists and the more conservative officials within IRI are having a hard time accepting this.

Is the leader of Islamic Republic pro women cycling?

The last week of Aug, a group of Tehran citizens gathered in the central arteries of the city cycling and carrying signs with a quotation from the leader of the Islamic Republic Ali Khamenei saying: “Cycling for women neither contravenes the law or the Sharia.”

Meanwhile Vaghayeh Etefaghieh daily published a report on cycling that contains a Fatwa from Ayatollah Khamenei saying cycling for women under certain circumstances is permissible.

Shahindokht Molaverdi, the President Hassan Rouhani’s Advisor on Women and Family Affairs has also published the ruling by the leader of the Islamic Republic in her Twitter account.

However, a number of media outlets are challenging reports of permissibility of cyclising for women in Shiite Islam, saying that the IRI leader does not support women cycling. One official have said that despite the rulings of the leader, the attire of women who take part in the Tuesdays: No Car Day campaign is by no means Islamic enough.

The office of the IRI leader has reacted to the report on Vaghayeh Etefaghieh saying: “The Leader believes that cycling, motorcycling and such activities if done in a manner that does not attract attention from strangers or indecency is permissible. Therefore individuals need to pay attention to the circumstances and if all above are complied with, these activities are permissible.”

The report also drew comments from another senior Sh‘ia cleric Ayatollah Makharem Shirazi who stated that there is nothing intrinsically wrong with women cycling; however, individuals should evaluate the situation and avoid it if they feel engaging in this activity would raise “possibility of danger or sinfulness”.

Websites linked to extremists in the establishment quote a different statement from the Supreme Leader of the Islamic Republic.

Recent postings refer to a recommendation given by Ayatollah Khamenei to ministry of sports officials in 1996 saying: “If you promote cycling then we will have girls cycling in the streets of Tehran. Clearly, this would not be appropriate. Tehrani women cycling in the city is not comparable to Chinese women cycling because with the Chinese, in the time of Mao and even later as we have seen, you could not really distinguish between men and women cycling on city streets. Especially with their kind of clothes. But women in Tehran with their tight pants and skin tight clothes getting on elaborate bicycles is sinful exposure.”

Cycling is not an offense

Cycling is not an offense in Iranian jurisprudence. However, women have faced obstacles against cycling in various junctures of Islamic Republic history.

In the 1990s, Faezeh Hashemi, daughter of prominent political figure and moderate cleric Akbar Hashemi Rafsanjani drew fire from the establishment for her support of women cycling.
Various facilities in the greater Tehran city rent out bicycles for commuting purposes; however, they have refrained from offering their services to women.

Parsa Company which runs a city bikes project has been quoted as saying that their services are not recreational and only for the purposes of commuting to work so they are not providing services to women.
A few years ago head of Tehran traffic police announced that women are barred from cycling in the city but the statement was retracted in 2012 by the head of Developments of Tehran Governor’s Office who stressed that there is no legal prohibitions against women cycling in the city and that the issue of women riding bicycles needs to be rectified and acculturated.

Women in Marivan Prohibited from Cycling

Last winter with the Clean Tuesday Project aimed at reducing air pollution once more the public was encouraged to leave their cars at home and cycle to work.

This led to the resurfacing of the controversy over women cycling in the streets. In Marivan, the police who had begun preventing women from cycling were immediately challenged by activists.

The opposition to the police made serious ripples in social media and finally the City administration announced that they have designated a section of the Women’s Park for the purpose of cycling. Marivan MP was quoted as saying that the city officials and the Friday Mass Imam do not object to cycling as long as the women comply with the Islamic dress code.

While Islamic Republic officials continue to vacillate between permissibility and prohibition over the issue of women cycling in the cities of the country, Iranian women continue to persist in fighting for the right to be treated fairly in all venues of life by the Islamic Republic system.

House of Khomeini and Mass Executions of 88