U.S. President Barack Obama gave reassurances that a nuclear agreement with Iran will be no threat to the Persian Gulf Cooperation Council states, addressing the leaders or representatives of Saudi Arabia, Qatar, United Arab Emirates, Kuwait, Oman and Bahrain in a meeting at Camp David. 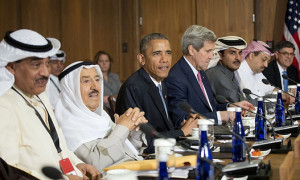 Obama said the United States has an “ironclad commitment” to ensure the security of the Gulf states. He added that the U.S. will ratchet up its cooperation with the Gulf states on counterterrorism, maritime security, cybersecurity and ballistic missile defence.

The U.S. has been at the forefront of nuclear talks with Iran and the 5+1 as a June 30 deadline looms for finalizing a deal.

Saudi Arabia, the longtime U.S. ally in the region, has not welcomed the prospect of a nuclear deal.

Obama said the Gulf leaders agreed that “a comprehensive, verifiable solution that fully addresses the regional and international concerns about Iran’s nuclear program is in the security interests of the international community, including our GCC partners.”

The rare gathering at Camp David was attended by the emirs of Kuwait and Qatar. Saudi Arabia, UAE, Oman and Bahrain, however, sent lower level representatives to the meeting.

Detained journalist gets to see lawyer after 10-month wait