Two Iranian chess contenders participating in the Tradewise Gibraltar Chess Festival earlier this month have drawn fire from Iran’s Chess Federation; one for appearing at the games without covering her hair and observing the hijab, the other for agreeing to play against an Israeli adversary. 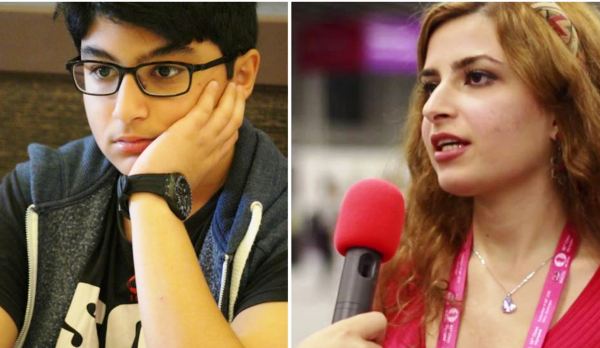 Dorsa Derakhshani the 18 year old Iranian female chess grand master, in addition to participating in the games without hijab, has also given a number of media interviews with her hair uncovered. Women in Iran are required to wear compulsory hijab whenever in public according to regulations set in place by the Islamic Republic after the 1979 Revolution in the country.

Mehrdad Pahlevanzadeh, head of Iran’s Chess Federation has announced that Derakhshani will be expelled from the national team for failing to observe the hijab during the games.

Meanwhile Derakhshani’s 15-year-old brother Borna Derakhshani another participant in the tournament has been penalized by the Iranian federation for not refusing to contend with an Israeli player. Islamic Republic of Iran does not recognize Israel as a state and expects its athletes to refuse competing with Israeli athletes in international tournaments.

Pahlevanzadeh stated: “Borna is a resident of Iran. They do not have flags at the tables in the tournament, only names are provided so it is not very clear which country one is competing with. Nationalities are only stated in the website.” Despite this recognition Iranian media quoted Pahlevanzadeh saying that “for competing with a Zionist opponent” the player will be prohibited from competing in any future national or international tournaments.

Pahlevanzadeh stressed that the Iranian contenders in the Gibraltar tournament were not official representatives of the country and their entry to the games was personally funded by the participants. He added: “Chess players cannot trample on Islamic values and deal blows to our national interests.” The Iranian official maintained that the Ministry of Sports has been briefed about the matter and strict measures will be taken to prevent such incidents from repeating.

Iranian women have basically lost all opportunity from participating in several sports disciplines due to the government’s insistence on their observing the hijab.

Meanwhile attempts at finding common ground between the country’s regulations and dress rules imposed by international sports bodies have not always been successful. Iran’s women’s soccer team lost the opportunity to compete in London Olympic Games because the Olympics Committee regarded their outfits unacceptable on the field.

While the committee ruling was later overturned, the team’s opportunity had already passed.