Building on fire collapsed in Tehran; many firefighters are feared dead

An iconic high rise on fire has collapsed in Iran killing at least 30 firefighters. Built in 1964, Plasco building was one the first high rises built in central Tehran and was home to many small businesses, shops and offices. 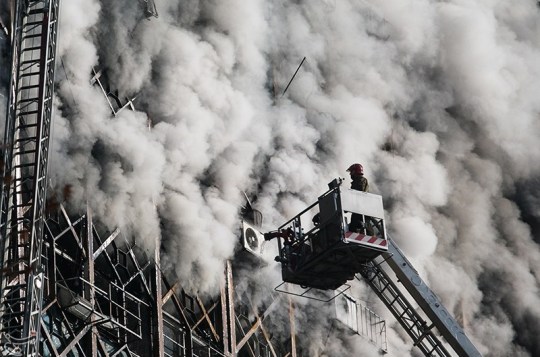 No official has yet confirmed the number of casualties but Mohammad Bagher Ghalibaf, Tehran’s mayor, has reported that at least 20 firefighters were inside the building when it collapsed.

Dozens are still missing. As the aid workers are removing the rubble, the state media has not yet reported the number of those missing.

The local press reports that in the meantime, the fire is contained but the wreckage is smoking which interferes with the rescue operation.

Shortly after the state media reported the building was engulfed with fire, the building collapsed live on the television as many Iranians watched the news developing.

Watch the state media coverage of the collapse:

The building had already been evacuated but firefighters could not prevent some shopkeepers who refused to leave or had gone inside the building to grab valuables, including ownership papers, bank notes, and money orders.

Jalal Maleki, the spokesperson for Tehran Fire Services has told reporters: “some refused to leave the building for a bunch of bank notes and ownership papers.” 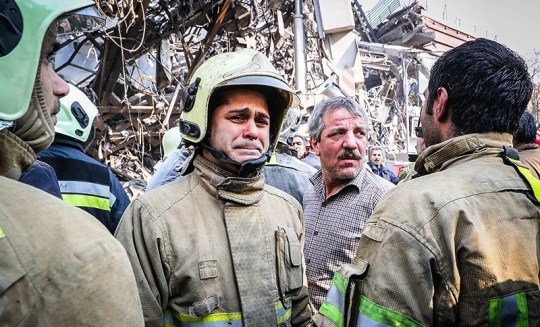 The Interior Minister, Abdolreza Rahmani Fazli, has ordered an investigation to the possible causes of the fire and Iran’s army has joined the aid work.

Citizens of the capital city Tehran are mourning the loss of lives and the loss of the building. Some have rushed to Red Crescent blood banks near central Tehran to donate blood. Some have gathered around the building, feeding social media with photos and commentary.

Tehran municipality, ambulance services and emergency aid workers have asked the crowd to disperse as it is interfering with the rescue operation.

On twitter too, Iranian are mourning. Many have blamed Tehran municipality and the city’s mayor Mohammad Bagher Ghalibaf for lack of funds and equipments for the fire services and emergency aid work.

The spokesperson for Tehran Fire Services has blamed the wearing infrastructure of the building for the collapse.

Tehran Mayor, Mohammad Bagher Ghalibaf is present at the scene as more than 200 firefighters and 10 fire stations are busy with relief work.

There is also news of a gas leak and Tehran Fire Services as asked nearby Embassies, government buildings and businesses to evacuate and leave.

The 17-story Plasco building, built in 1964 was one of the first high rises of modern Tehran and source of nostalgia for the city.

Sweatshop Workers in Collapsed Building in Iran Left Without Jobs