It has now been established that Islamic Republic of Iran (IRI) Supreme Leader has absolute jurisdiction over the release of the three opposition leaders who have been under house arrest since February 2011. Mir Hossein Mousavi, Mehdi Karroubi and Zahra Rahnavard are the leader of the 2009 Green Movement in Iran and they are still being kept under house arrest without due processes. 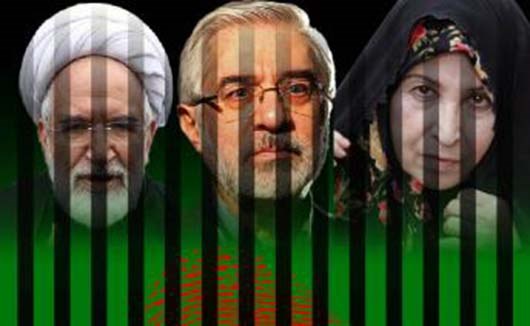 The cessation of the house arrests hangs solely on the order of Ali Khamenei, IRI’s Supreme Leader. He, however, will only give that order if it does not appear as surrender to his opponents.

Ali Khamenei was at first hoping that the Green Movement would subside across the country so the release could occur without political reverberations, like the termination of late dissident cleric, Ayatollah Hossein Ali Montazeri’s house arrest which made the headlines for only a day and made no ripples in the political scene.

In October 1997, after openly criticizing the authority of the Iranian Supreme leader Ayatollah Khamenei, Ayatollah Montazeri was placed under house arrest under the pretext of protecting him from hardliners.

Ayatollah Montazeri, who was to succeed Ayatollah Khomeini – IRI’s first leader- as the second leader of the Islamic Republic, had been deposed from that position long before his release in 2003 from house arrest. During the Montazeri’s house arrest from 1997 -2003, all his supporters were sidelined from the political scene.

MirHosein Mousavi and Mehdi Karroubi, however, have several supporters inside the current government such as the head of Expediency Council, Ayatollah Akbar Hashemi Rafsanjani and many cabinet ministers in the Hassn Rohani administration.
Therefore releasing the leaders of the Green Movement at this juncture could result in a new movement in the Islamic Republic making Rahnavard, Mousavi and Karroubi influential in the current political milieu.

Ali Khamenei primarily wants Mousavi and Karroubi to request a release from him. They have not only refrained from putting out such a request but have, through various channels, called on the “despotic state” to recognize their right to a court hearing to face their charges (which have, in effect, never been formally laid against them).

The lack of such request indicates that the opposition leaders are in no way repentant even after 2000 days under arrest. This is despite the fact that many political figures that were jailed after the 2009 election protests have argued that the situation of the Green Movement leaders under house arrest is more insufferable because in the general prisons, political prisoners at least have the opportunity to communicate with their peers and organize events together.

The leader of the IRI may choose the approaching presidential elections in 2017 to end the house arrests. Now that Ali Khamenei supporters have successfully carried out the crippling of Rohani’s reformist government, he might feel in the second round of elections, Rohani’s supporters would be too disillusioned with the reformists to try and transform the end to the house arrests into a vehicle of political change.

Another option might be a gradual end to the house arrests as was done in the case of Ayatollah Montazeri. First they could be given limited communication privileges with the outside world; then allowed visits from government officials as has been requested by a number of MPs.

However, Mousavi and Karroubi are being treated more severely by the Islamic Republic because of the current political scene and the greatly changed nature of communication tools available. In the past, ending of the house arrest did not in and of itself give a greater scope of communicating with the public but today the internet and social media allows immediate widespread access to supporters.

Finally Iran’s Supreme Leader does not seem to be under any serious pressure to release Zahra Rahnavard, MirHosein Mousavi and Mehdi Karroubi.

The Rohani administration and other politicians who support these opposition leaders do not appear to have the political means to put pressure on the leader.

Meanwhile international and Iranian human rights groups outside Iran have not made the release of these leaders a priority. Therefore, the house arrests may continue on for another while.

The political fate of these leaders after an eventual release may not be so clear either. Karroubi remains the leader of the National Trust Party but several of the party’s prominent members have not maintained their loyalty to him. Mousavi on the other hand did not define his political views through any specific party and it remains to be seen whether he will retain his defiant stance of 2009 or fall back to his political docility of 1989.

House of Khomeini and Mass Executions of 88