Killing of porters and arrests persist in Kurdistan border regions 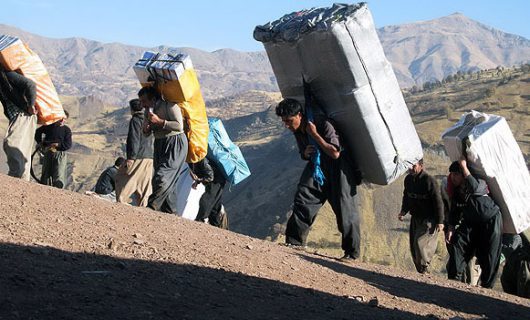 Earlier last week two other porters, two brothers from Sardasht were also killed by the security forces. Following this incident security forces were reportedly put on high alert and residents of the border regions were warned to refrain from engaging in the cross-border activity.

Meanwhile in the Piranshahr border areas horses of the locals were shot at and killed. Local reports maintain that security forces have been shooting horses since three years ago in an attempt to prevent the local smuggling operation. The killings have triggered a wave of protests from animal rights activists. Kurdish reporter and activist Saman Rasoulpour reports that scores of mules and horses have been shot down to keep porters in check and by extension to silence any protests against the dismal living conditions in the region.

Porters are often from impoverished families that are driven to the hazardous job to make ends meet. The government has steered clear of investing in development projects in the border regions of the country which has made these areas suffer from persistent high unemployment.

Meanwhile close to 20 Kurds in Western Azerbaijan were arrested by Iran’s Revolutionary Guards. In Mahabad, Oshnouyeh and Sanandaj many people have been arrested at their workplaces or homes without valid arrest warrants.

The arrests appear to be related to tensions between the opposition group Kurdistan Democratic Party and the Revolutionary Guards in the past months which has caused several deaths and injuries in the recent weeks. While the IRGC reported last week that they prevented the illegal entry of a group of 11 people in the Kurdistan border regions, the Kurdistan Democratic Party announced that it has killed scores of Revolutionary Guards forces.