Jailed laser physicist Omid Kokabi is temporarily released on the exorbitant bail of 500 million toumans (150,000 USD) after repeated calls for his release due to health complications related to his kidney cancer. 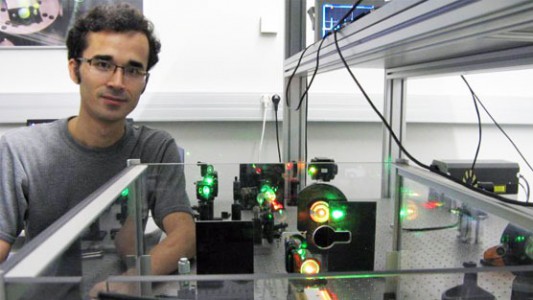 Kokabi, was a PhD. student specializing in laser physics at the University of Texas at Austin and was being held in prison in Iran for his refusal to work on military research projects.

Kokabi who was diagnosed with kidney cancer in March 2016, has been receiving international support both from the human rights organizations and the scientific community.

Five weeks ago his right kidney was removed in a hospital in Tehran and the images of him on the hospital bed went viral.

In the past months, Kokabi remained in Tehran’s Sina hospital for chemotherapy and post-operational treatments. Today, he was released from his hospital room, were he was still being held a prisoner.

In April, Kokabi’s lawyer (Saeed Khalili) had told Iranian labour News Agency (ILNA) that based on article 502 of Criminal Code of Procedure for Public and Revolutionary Courts, he will try and appeal Kokabi’s sentencing one more time on the grounds of his client’s grave illness. The Iranian judiciary however did not welcome the proposal for Kokabi’s release from prison.

In 2011 Omid Kokabi, was arrested when he went home to visit his family. After arrest Kokabi was offered a position to work for the Army of the Guardians of the Islamic Revolution on their military research projects and he refused to cooperate.

Kokabi was initially charged with “assembling against national security” and was acquitted from that charge. He was later put on trial for “communicating with a hostile government” and “illegal earnings” which were based on providing evidence of his graduate university work and research in the United States.

Kokabi and his lawyer have repeatedly denied all charges and have told media that his sentencing are based on his refusal to work with the Islamic Republic of Iran on military projects.

Omid Kokabi’s cancer is said to be four years old, and he has spent every day of those four years in jail without one single day of leave. In the five years and 4 months he has suffered from kidney pains, and tests in prison led to a diagnosis of kidney stones.

Kokabi was not allowed to have tests or treatment outside the prison until April 20, when doctors were forced to remove his right kidney. Medical neglect in while in custody has contributed to advancement of cancer in his body.

On 18 May the Committee of Concerned Scientists joined with Amnesty International in calling for a letter-writing campaign in support of Omid Kokabi’s release; the letter asked the Iranian authorities to unconditionally release the young physicist.

Controversial Comedy Barred from Screening in City of Tabas in Iran