Tehran’s police chief announced that his department is on alert to prevent offences during Chahrshanbeh Souri, stressing that any arrests will last throughout the New Year holidays. 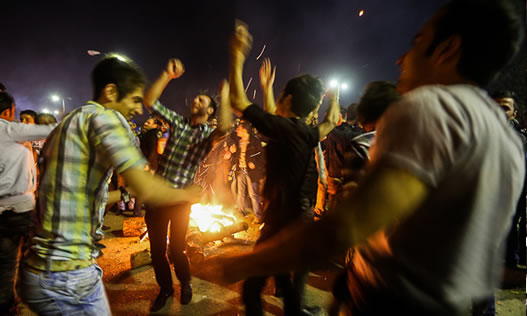 ISNA reports that Hossein Ashtari said on Sunday March 6 that special police hubs have been established in various locations for the Norooz period to confront peace and order disturbances.

Iranians celebrate the New Year on the first day of spring, referred to as Norooz, and on the last Tuesday night of the year they customarily engage in jumping over bonfires and setting off fireworks. Islamic Republic security forces are wary of the neighbourhood gatherings in celebration of Chahrshanbeh Souri and often discourage the public from engaging in them.

Ashtari said those producing and distributing hazardous fireworks will be arrested and held until the end of the Norooz holidays.

He also added that vehicles used in any form of disturbance will be impounded over the holiday period.

Despite efforts by Islamic Republic authorities to discourage Chaharshanbeh Souri festivities as a hazardous activity best to be avoided, the public tends to enthusiastically embrace the occasion by building bonfires in neighbourhood alleyways and leaping over them.