An Isfahan Province tourism official says there is no barrier to organizing mixed-gender family tours in Maranjab and Nooshavad as long as “Islamic values” are preserved. 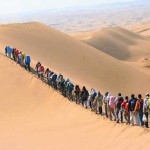 Iran’s state news agency, IRNA, reports that Mohasen YarMohammadian said on Sunday December 13 that the decision resulted from a review of recent objections.

He reported that a meeting was held between the governor, the prosecutor and the head of security forces to discuss the suggested ban on mixed-gender tours of Maranjab.

Earlier, the regional prosecutor had announced that starting December 14, mixed-gender tours would be banned in Maranjab. He maintained that allowing mixed-gender tours resulted in “the violation of religious and Revolutionary values”.

YarMohammadian said today that most of the Maranjab tours are “very healthy and observe Islamic values”, and a broad ruling on mixed-gender tours “cannot be used as an appropriate standard for organizing regional tourism”.

The local Friday Mass Imam, Mohammad Mousavi, had called for a complete halt to tourism in Maranjab if local authorities were unable to “run the tours under adequate regulations”.

The Maranjab desert to the north of Aran and Bidgol city is a popular tourist destination close to a number of salt lakes and Kavir National Park.

Ceasefire announced in Yemen in advance of peace talks