The head of the Iranian Revolutionary Guards Corps (IRGC) said that without Hossein Hamedani, the IRGC commander who was recently killed in Syria, it would have been very difficult to “handle” the 2009 election protests. 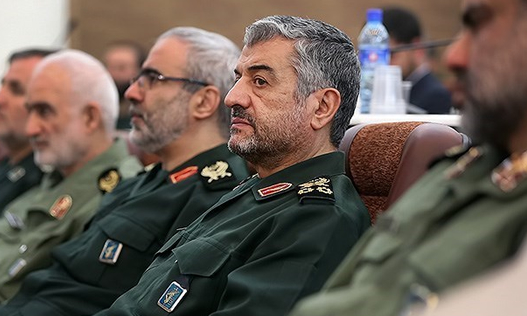 Speaking at Hamedani’s funeral, Mohammad Ali Jafari said on Monday October 12 that the late commander played a pivotal role in silencing the mass protests of 2009.

The IRGC announced earlier that Hossein Hamedani was killed by ISIS forces in the suburbs of Aleppo in Syria.
Jafari spoke of Hamedani’s establishment of the “Mohammad Rasoulallah” Guard in Tehran, saying: “Destroying the enemy conspiracy in the sedition of 2009 was one of the great accomplishments of Commander Hamedani.”

The 2009 election of Mahmoud Ahmadinejad was challenged by other candidates with allegations of vote fraud, which led to widespread mass protests in several of Iran’s large cities. Scores were killed and hundreds were arrested. The authorities refer to the protests as “sedition”.

“Without the experience and management of Commander Hamedani during the Ashura events of 2009, handling the sedition would have been very difficult,” Jafari said.

One of the toughest clashes between protesters and Iranian security forces occurred on the day of Ashura for that year in December of 2009.

The head of the IRGC referred to Hamedani as the “most honoured martyr” of the Islamic Revolution, saying: “After the 2009 riots and silencing the sedition, he could not sit still and volunteered to join the Resistance Front in Syria” and “after transferring his experiences and carrying out his advisory duties, he gave his life to Islam”.

Iran has supported the Beshar Assad regime in Syria, and Jafari referred to Iran’s role in Syria as “support for the Islamic resistance front”.

Newspaper may face trial for its headlining of commander’s “martyrdom”