After U.S. officials alleged that four of the Russian cruise missiles targeting Syria had crashed in Iran, the news was denied by Russian and Iranian defence ministries. 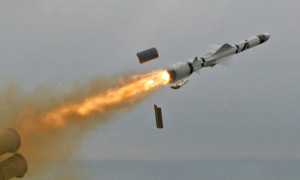 The Sputnik website quoted a source in the Iranian defence ministry on October 9 saying the U.S. report “is part of the Western propaganda war against Moscow”.

The story began on Thursday October 8, when CNN quoted two U.S. officials to report that “a number of cruise missiles launched from a Russian ship and aimed at targets in Syria have crashed in Iran.” The report added that while the exact location of the crashes was not clear, some buildings were damaged and civilians may have been hurt.

The Russian defence ministry has also denied the report, saying all of its cruise missile have hit their predetermined targets.

Gen. Igor Konashenkov, a spokesman for the Russian defence ministry, said raw recordings of the missiles hitting their targets are evidence of the false statements in the U.S. report.

Russia began operations against targets in Syria from its navy carriers in the Caspian Sea on Wednesday October 7. The operation reportedly involved 26 cruise missiles hitting 11 targets in Syria.