The European Commission believes Iran could become the major supplier of natural gas to Europe by the end of the next decade. 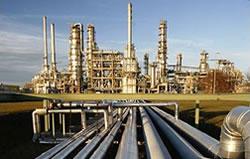 A report by The Wall Street Journal on September 13 indicates that by the year 2030, Europe could import between 25 billion and 35 billion cubic metres of gas a year from Iran, according to a European official and a European energy company representative.

The report indicates that this would put Iran on par with North Africa as a natural gas supplier to Europe and reduce EU dependence on Russian natural gas.

Following the nuclear agreement reached between Iran and the 5+1, European countries are vying to be a part of the Iranian oil and gas market.

Earlier this month, the EU’s energy and climate commissioner held a meeting with delegates from European energy companies and Iranian officials in Tehran, and said: “We want our companies to go there and invest big time… before the Americans and the Chinese.”

The British prime minister, German chancellor and French president have expressed support for the nuclear agreement with Iran and, in an editorial in the Washington Post, were quoted as urging the U.S. Congress to back the deal.