The German defence ministry reports that Kurdish forces fighting against ISIS have been targeted with chemical weapons in recent days. 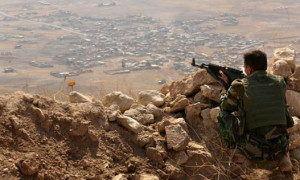 In a report on August 13, AFP quotes a German ministry spokesman saying there was a chemical weapons attack southwest of Erbil causing respiratory problems for some of the Kurdish Peshmerga. The report adds that German military personnel who are training Kurdish fighters in the region were not affected by the attack.

While the spokesman did not identify the perpetrators, he said that the chemical agent was delivered using mortar and artillery shells, adding that “”American and Iraqi specialists from Baghdad are on their way to find out what happened.”

The extremist group ISIS has been accused of using chemical weapons in the past.
The Iraqi Kurdistan government alleged in March that ISIS used chlorine in a car bomb attack in January.

A report by the Conflict Armament Research group and the Sahan Research group last month also indicated that ISIS used a projectile to target the Peshmerga with an unknown chemical agent on June 21.

The report added that two other such attacks, documented in northeastern Syria in June, caused burning sensations in the throat, eyes and nose, severe headaches, muscle pain, impaired concentration and mobility, and vomiting.