Iranian schools are still rejecting many Afghan children despite a statement by Iran’s Supreme Leader that all Afghan children in Iran should have the opportunity to study. Ayatollah Khamenei’s edict even included the children of undocumented immigrants. 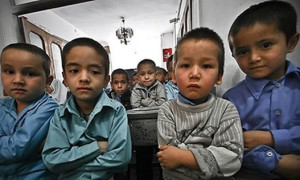 The Etemad daily reports that despite the leader’s insistence that no Afghan child should be held back from education, many school are still rejecting these children.

The Nasser Khosro Children’s Home, which until now was responsible for educating numerous Afghan children rejected by public schools, reportedly gave students’ families the address of their local schools, only to receive reports that most of these schools are rejecting the children, giving excuses such as “not having any space, not having received the Ministry of Education directive or just not being informed about the changes.”

Fatemeh Mousavi, a 15-year-old girl who has been studying at the Nasser Khosro independent school, is supposed to enter grade eight this year but so far she has not been allowed to register anywhere. She says she is prepared to write any exam and do anything to continue her education at the university level. “I want to become a translator or a doctor. I want to return to Afghanistan and serve my country.”

She says she tried enrolling at a school in southern Tehran but was told she could not register without documents.

Afghan immigrants are the largest immigrant group in Iran and many continue to face widespread discrimination and the denial of access to services.

Iran rejects alleged link to bombing hinted at by Bahrain

Jailed web designer may get family visits after jail move