An uncensored version of the Iranian film Resurrection, which has generated serious controversy in Iran, will open the International Baghdad Film Festival. 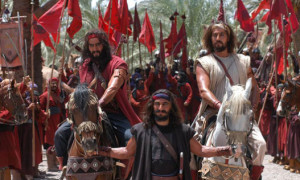 The film currently has two versions: one is complete and the other had 40 minutes of footage cut out, eliminating images of religious figures of Ashura.

Ammar AlAwadi, the deputy head of the BIFF, announced that the festival will take place October 1-5 in Baghdad and will screen the full version of Resurrection.

The Fars News Agency reports that Ammar AlAwadi met with Iran’s cultural attaché at the Iranian embassy in Baghdad to discuss the matter. Iran has promised to assist in the BIFF event, which will dedicate one whole day to Iranian cinema.

Resurrection by Ahmadreza Darvish was made with the financial support of Ayatollah Sistani, Iraq’s Shia leader, and is supposed to be a response to the series “Al-Hassan and Al-Hussien”, which was aired by Sunni extremist satellite services in Arab countries.

In Iran, extremist groups have demonstrated against the film because it shows the faces of the religious figures involved in the historic events of Ashura, which they consider blasphemous.

One hundred protesters gathered in Qom and another 400 in front of the Shokofeh Cinema in Tehran, which led to police involvement.

The film has now been pulled from cinemas, and while the Ministry of Culture says the screening of the film is simply suspended for now, Darvish says his film has been confiscated.

The ministry spokesman has said, however, that the film will be re-screened after a review by members of the clergy.