Only two hours after the anticipated ceasefire brokered by the United Nations, Saudi planes bombed Yemen’s capital Yemen and clashes were reported in Tiaz, the third largest city in the country. 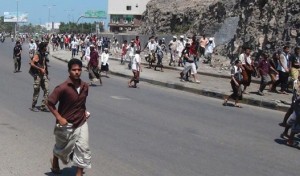 The United Nations had announced that a ceasefire will take effect at midnight on Friday July 10 to allow for the delivery of humanitarian aid to Yemenis who have been ravaged by months of war and continued air strikes by a Saudi led coalition.

The ceasefire was to remain in effect until the end of the Muslim month of Ramadan on July 17.

AP reported that according to the UN both sides had agreed to the ceasefire without any conditions.

UN spokesperson Stephane Dujarric was quoted as saying that exiled Yemeni president Abed Rabbo Mansour Hadi had informed the Saudi-led coalition of the decision “to ensure their support and collaboration”.

The coalition has been bombing Yemen for months in an attempt to return the exiled president to power.

Reports indicate that Hadi had first put a number of conditions on the ceasefire, but further discussions convinced him to drop the conditions and accept an unconditional pause.

On July 1, the UN declared the highest-level humanitarian emergency in Yemen, when UN envoy Ismail Ould Cheikh Ahmed reported that the country was on the verge of famine.

The UN has called for humanitarian agencies to be granted unhindered access to all parts of the country to deliver aid.

The UN reports that 21 million Yemenis are in immediate need of aid, representing 80 percent of the population.