The Asiatic Cheetah, which now can be found only in Iran, has been offered increased protection through an agreement between the United Nations Development Program and Dana Insurance. 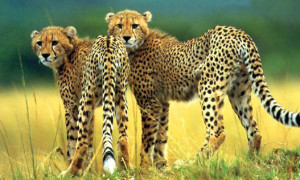 IRNA reports that at an event formalizing the agreement between the Dana Insurance Company and the UN Development Programme to support the Conservation of the Asiatic Cheetah Project (CACP), implemented with the Department of the Environment, Gary Lewis, the UN Resident Coordinator said: “ We have gathered here to sign an agreement with Dana Insurance Company and mark yet another milestone in our struggle to save the Asiatic cheetah”.

The agreement provides insurance coverage by Dana Insurance to mitigate threats to the endangered animal by helping to implement strategies of the Asiatic Cheetah Project.

Each time a cheetah is killed in a road accident or other human-related cause, the project will receive 500 million rials from Dana Insurance to reduce the specific hazards. The funds will be provided for five cheetahs per year.

Lewis added: “The partnership between Dana Insurance Company and the CACP is an excellent example of the positive results that can be achieved when the public and private sectors join forces in pursuit of a common goal. Such cooperation underlines the essence of partnership-building, which is required for future sustainable development.”

The Asiatic cheetah, which used to live all across the Indian subcontinent as well as in central and Southwest Asia, is now limited to seriously low numbers living in Iran and in constant threat of extinction due to loss of habitat and illegal hunting by poachers.

In 2001, Iran’s Department of the Environment, the United Nations Development Program and a number of independent environment groups joined forces to save the Asiatic cheetah from extinction.