The United States has reduced its shale oil exports for the first time in over four years. This reduction, in conjunction with the intensification of tensions in the Middle East, pushed up the price of crude oil on international markets to over $58 dollars a barrel on Tuesday April 14. 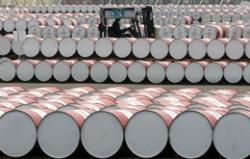 The U.S. Energy Information Administration (EIA) announced that in May, it will reduce daily shale oil exports to 45,000 barrels a day.

The fall of oil prices from $115 dollars a barrel to $58 leaves little profit in the exploration and production of shale oil.

Analysts predict that by the end of the year, oil prices will reach $70 a barrel.

Meanwhile, Yemeni authorities announced on Tuesday that declining security in the country has forced them to stop liquid gas production.

In addition to gas exports, Yemen also exports 130,000 barrels of oil each day, and the continuation of the internal conflict along with Saudi Arabia’s involvement have also contributed to the upward movement of oil prices.

China increased its oil imports by 7.5 percent, which appears to be a move to store crude.