Australian Prime Minister Tony Abbott says his country is engaged in talks with Iranian authorities in order to return Iranians who have been denied refugee status in his country. 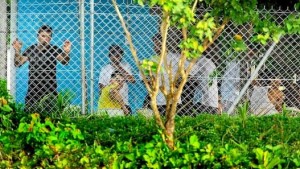 Australian media report that Julie Bishop, the Australian foreign minister, is preparing to travel to Iran to lobby the country on the issue of accepting hundreds of Iranian asylum seekers who have failed in their bids to obtain refugee status.

The Guardian reports: “It’s important that those who are found not to be refugees go home,” Abbott told reporters in Sydney. “And this is where we will be talking to the Iranian government about taking back people who are … Iranian citizens, because they deserve to be in Iran. They belong in Iran.”

The Guardian writes that according to official figures from late March, 20 percent of the 1,848 people in Australian’s immigration detention centres are Iranian. Many of them are held in centres in Nauru and Papua New Guinea’s Manus Island, where Reza Barati, an Iranian asylum seeker, was killed in February 2014.

The plan to deport asylum seekers who have been deemed not to be refugees has also found support from the country’s opposition leader.

The report indicates that 15 Iranian men in Australian immigration detention centres have started hunger strikes. One of them has been reported to be in poor health and classified as “high risk”.