Teachers of private schools protest in the city of Varamin.

Over the past two months, poverty, unemployment, and labor protests have spread throughout Iran as the covid-19 numbers are rising and making the situation worse for those workers who have lost jobs as well as those who still have jobs. 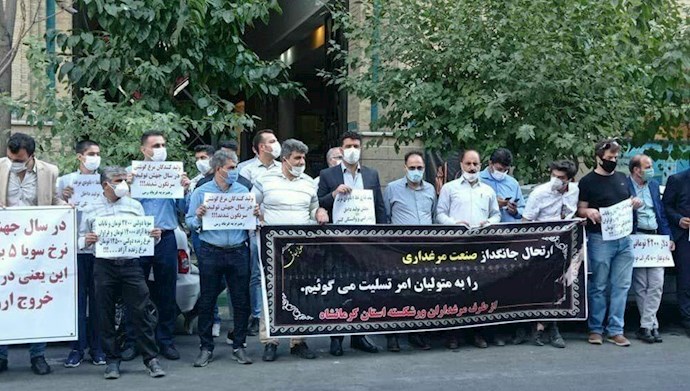 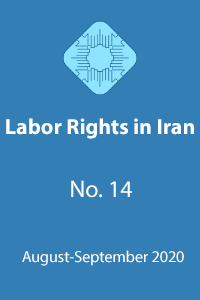 Covid-19 is spreading in what is now being called the second-wave of spread in Iran. As the Deputy Minister of Health Iraj Harirchi stated the whole country is now in a state of emergency with high numbers of covid-19 infections affecting most urban centers: “We no longer have orange and yellow (regions). The whole country is in a red state.”

Iranian workers and the working class have been plunged into a whirlpool of a livelihood crisis as a result of the covid-19, the devaluation of the Iranian currency, the inflation and as well the US sanctions.

Food prices have risen to a point that many workers and working-class families cannot afford more than one to two serving of red meat in their weekly groceries’ basket. In September, the price of butter rose 90% in two days. Within one week, the price of eggs increased by an unprecedented 85%. Fried egg is now a dish for the rich.

Rent is going up to a point that many families are forced to move outside of cities. A July 2020 report by the Central Bank of Iran found that rental rates in Tehran increased by 27.4% compared to the same month last year. This report also indicated a 30.6% increase in rent for all urban areas in Iran.

The Blow to Healthcare and Nurses

The Iranian healthcare system is also struggling with a shortage of equipment, pharmaceuticals and nurses. For example, insulin pens have become scarce in Iranian pharmacies. But shortage of nurses does not mean hiring of nurses, the system is relying on contract nurses who are working for less with no benefits.

The number of nurses per capita in Iran is 1.5 per thousand people. In an attempt to compensate for the shortage of these professionals, the Ministry of Health has been hiring nurses on a contract basis through contractors since 2013. However, the outbreak of COVID-19 has exacerbated the shortage of nurses in hospitals. This practice of outsourcing healthcare with temporary employment contracts has led to job and livelihood insecurity in the health sector. At the same time, this policy has made the health of citizens subject to the calculations and profits of contracting companies. According to Mohammad Sharifi Moghaddam, Secretary General of the Iranian Nurses’ House, about 30% of the country’s medical staff consists of contract workers.

Teachers who have been protesting the reopening of schools in the current covid-19 situation were forced to open the classrooms. This is all happening at the time that all their previous demands for better work conditions have not been met. In the past two months, teachers have repeatedly protested in front of the parliament to demand better salaries and employment conditions.

The doors of many schools are now open but in the higher risk area, there is also the virtual classroom which is by no means accessible to all. According to Rezvan Hakimzadeh, Deputy Minister of Primary Education, 4,718,000 students have not been able to join the “Shad,” a virtual education network, due to a lack of access to tablets and mobile phones. Many fear that these students will drop out of school.

Minister of the Ministry of Welfare has predicted that the COVID-19 crisis will affect around 4.8 million jobs, which is equivalent to 20.3% of Iran’s total employment. Those who still have jobs are facing delayed payment or nonpayment of wages.

As a result, workers in the oil and energy sector went on a nationwide strike, in addition to the workers at the Haft Tappeh Sugarcane Agro-Industry Company and the Heavy Equipment Production Company (HEPCO) who continued to strike, citing an objection to irregular payment of wages and privatizations of these factories.

On several occasions over the past two months, security forces attacked trade union gatherings. Two of these events included the August 25 Haft Tappeh Sugarcane Company workers’ rally in front of the governor’s office in the city of Shush (Susa) as well as the September 7 rural telecommunications agents’ rally in front of the parliament.

The suppression of workers and labor activists is happening at a time that their demands for better wages and payment of wages are even more vital considering the level of covid-19 spread in Iran.

Invitation to Reflect on a Beheading