The musicians in Iran are constantly being harassed and mistreated by the conservatives who are in power in judiciaries, especially in religious urban centers. They are now asking Iranian president to stand up for their rights. 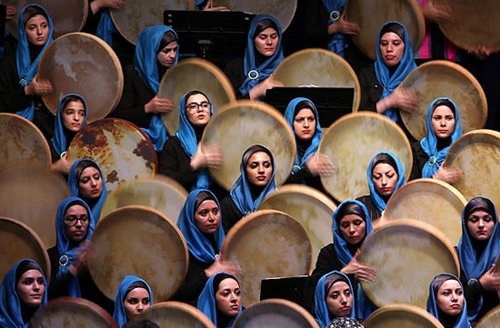 A year after 600 Iranian musicians wrote a letter to Iran’s president, Hassan Rouhani, objecting to increasing mistreatment of the music community and the illegal cancelation of concerts, nearly 100 of them gathered to voice their concerns.

This gathering was held on 2 Aug 2017 in Tehran’s house of music, an unofficial union site for Iran’s music community who have been experiences increased pressure as of a year ago when conservatives in various cities in Iran have decided to arbitrary cancel concerts that have legal permits.

In Iran, the Ministry of Culture and Islamic Guidance, working under the president is the government body that issues permits for concerts. However, the judiciary, an often conservative branch of the state works with law enforcement officials to cancel concerts that have legal permission.

The Islamic state has never had an entirely harmonious relationship with music and the music industry post 1979 revolution in Iran. In the first decade after the revolution popular music was banned, followed by periodic bans on music education. After the reformist took power in Iran in 1997, pop music returned, followed by jazz, rock, rap, R&B, techno and all subgenres of music in the western world. The conservatives could never entirely contain the growth of music production in Iran – both underground and legal music groups sprouted.

However, it has been a year that the pressure on legal music has also increased dramatically.

In the most recent instance on Friday July 28, the concert of veteran singer Shahram Nazeri and his son Hafez Nazeri in Quchan was shut down by order of the city’s prosecutor. Last week in Yazd and Karaj Hamed Homayoon’s and Fereydoon Asayi’s concerts were cancelled at the last minute in the respective cities by the order of their prosecutors.

The 100 musicians that had gathered in Tehran’s House of Music called upon Rouhani saying “isn’t the cancellation of concerts a disregard for the rights of artists’?”

In the past week, Five hundred Iranian musicians, activists, and artists also signed a petition calling on the Ministry of Culture and Islamic Guidance to identify the culprits behind the cancellation of ministry approved concerts across the country and to slap them with the charge of “disrupting the law and public order.”

On a letter published on Monday 31 July 31, the signatories highlight the “politically charged pressures increasingly imposed on music”. They stress that the recent last minute cancellation of concerts that carried clear approval from the ministry show clear disregard for the rule of law.

The letter reminds the ministry that those standing against the law and order of the country should clearly be held responsible for their actions.

The signatories also call for the establishment of a Security Fund for the artists to off set their losses in such cases and provide them a minimal job security.

Conservative factions of the Islamic Republic across the country have reacted to the moderates at the helm of the Executive Branch by extremist actions such as closing down concerts on the exact scheduled dates of these events triggering outrage from musicians as well as fans and the audience.

She stressed that the parliament needs to investigate why government bodies that have no jurisdiction over cultural matters, are interfering in the responsibilities of the Culture Ministry. She stressed according to the law, the judiciary and prosecutors are responsible for providing security for concerts and have no jurisdiction over approval or cancellation of these events.

Ali Motahari, vice chairman of the Iranian parliament has pointed the finger at the Minister of Interior Abdolreza Rahmani Fazli for allowing the cancellation of certain concerts in cities across the country and warned President Rohani no to succumb to conservative pressures and approval from the Supreme Leader ayatollah Khamenei for his choice of cabinet ministers.

Ayatollah Khamenei’s office has reacted to Motahari’s statement saying the leader does not interfere in the President’s choice of ministers adding that Ayatollah Khamenei is however very sensitive to the leadership of the Ministry of Culture and Guidance.