Hundreds of Workers Protest in front of Iran Parliament

Hundreds of retired teachers, social workers, the workers of Telecommunication Company of Iran (Mokhaberat), as well as private sector contractors who had work for the company have gathered in front of Iran’s parliament to demand their rights. 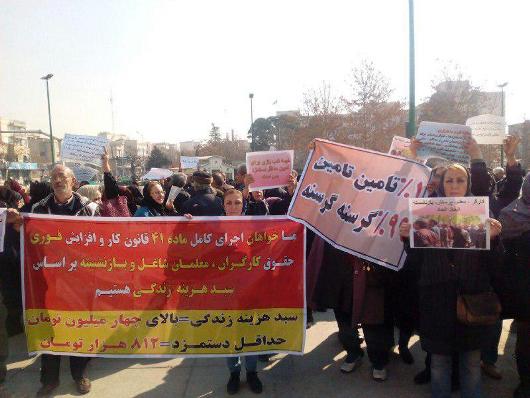 As of 10 am 21 Feb, the Association of Retired Teachers has planned a sit in protest in front of Iranian parliament.

Other workers including workers for the Telecommunication Company of Iran have also joined the protest demanding wages that are passed due, or not increased.

Worker in front of the parliament are demanding an increase to minimum wage as well as an increase to bonuses that are often provided for worker’s family and household expenditure.

Reporters at the Iranian parliament say that there is a crowd of 500 present carrying placards and slogans. The protest has been peaceful.

Top Professor in Iran Sentenced to Imprisonment and Flogging