Mother of Iranian prisoner Omid Alishenas who was arrested last week by Sarallah Forces to serve his sentence in Evin Prison has once more spoken out against the treatment of his son calling his sentence unjust and his arrest in violation of rules and regulations of the judiciary. 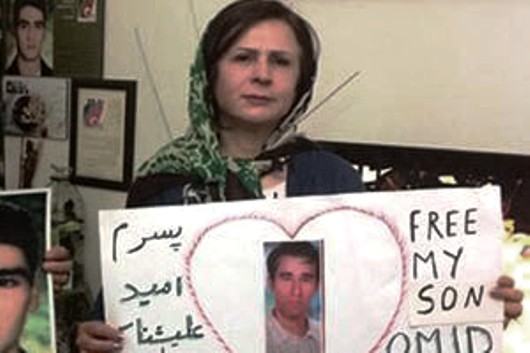 Omid Alishenas was arrested 10 December at his family’s home by Sarallah Forces in Tehran to serve out his sentence. Alishenas was first arrested two years ago and charged with “assembly and collusion against national security” and “insulting the leader”, charges often brought against social and political activist by the Islamic Republic judiciary.

Alishenas was sentenced to ten years in jail and his sentence was reduced to seven years in the appeals court.

He was released on bail after 17 months in jail last December.

In an interview with Radio Zamaneh Alishenas’s mother, Simin Eyvazzadeh insisted on his son’s innocence. She said she will fight by all means to challenge his son’s sentence: “I challenged the illegal arrest of my son; they held me for nine days and threatened me with a flogging order but at last they knew they were breaking the law and they released Omid.”

She added that she will continue to fight for his son’s release.

Eyvazzadeh explained that on Saturday the officers arrived at their home with a written order for son to report to prison. They reportedly insisted that they are going to take him. She added that by law his son should have been given five days to report to prison and an arrest would only be warranted if those five days had expired.

Eyvazzadeh accused Sarallah Headquarters of lacking any commitment to uphold the law. She said: “I told them Omid has been out for over eleven months. He has not fled or anything. He is here and only a summons would suffice for him to report to the judiciary. He has not stolen anything, he is part of no corruption scheme or any crime. Why should he be arrested in this manner? Issue your summons and he would appear before you.”

Mother of the jailed activist maintained that the actions of the authorities can only be aimed at creating an atmosphere of fear. “They are well aware that if he was planning to flee the country, he would certainly have done it in the eleven months that he has been out so there can be no explanation for such actions other than creating fear and anxiety among the public.”

Simin Eyvazzadeh stressed however that she will not surrender to such attempts and she will not rest from challenging her son’s sentence. “We are only demanding what is our right so I have no fear. I will continue to protest against their actions and will use every forum to express my protest…They cannot expect silence against their injustices,” she said.