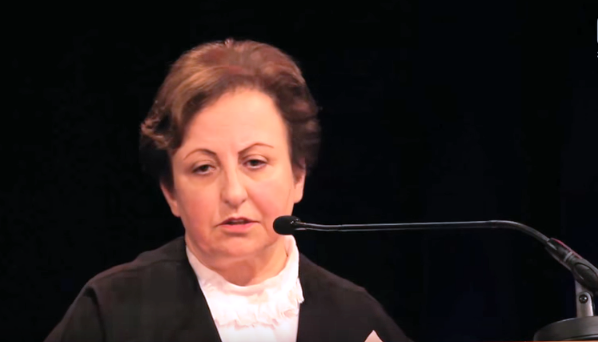 Referring back to a speech by Human Rights Ambassador of Netherlands, Kees van Baar who expressed hope of visiting Iran, Ebadi asked the western governments to maintain a dialogue with the real civil society in Iran.

Ebadi called Kees van Baar intentions “noble” and said she is against isolation of Iran. She expressed hope that western governments in pursuit of trade agreements with Iran would pay close attention to the human rights situation and the demands of the civil society.

She warned about the government-organized non-governmental organization (GONGO) that the Iranian government often introduces to western officials in Iran in order to silence the real demands of the civil society: “I welcome dialogue in term of economic, social and trade issues but be aware of CONGOs.”

Using examples from two recent Zamaneh Media initiatives, She expressed hope that the fight for challenging state impunity and documenting cases of human rights abuse will continue. Ebadi mentioned the Evin Memorial Campaign, an initiative of Zamaneh Media in which political prisoners, their families and loved ones publish their memories of Evin prison in Tehran.

Ebadi explained that the Evin campaign at Zamaneh is an initiative to counter the state authorities’ attempt to wipe off the memory of Evin by building a recreational park and high rises at the site of the prison.

She also welcomed a new initiative by Zamaneh Media to challenge state impunity by compiling citizen complaints against the state and documenting state atrocities.

In her speech, Dr. Ebadi emphasized the role of Zamaneh as an independent media in contributing to a culture of freedom of expression: “I congratulate Zamneh, its director, editors, and journalists for the resistance have shown in the past 10 years.”

She also emphasized the role of production of knowledge and education and said: “when there is no freedom of expression, education and literature proliferation will suffer.”

Using the example of Zamaneh’s LGBT section that aims to raise awareness on taboo subjects in Iran, Ebadi affirmed that progressive media outlets like Zamaneh contribute to a culture where “self-censorship which is worse that censorship” is also lifted.

Ebadi maintained throughout her speech that the existence of independent media organizations is very important for the future of Iran and the outcome of democracy.

Domestic politics and human Rights in Iran; a panel discussion