Domestic politics and human Rights in Iran; a panel discussion

On the occasion of the 10th anniversary of Zamaneh Meida, Raha Bahreini, Ammar Maleki and Azadeh Pourzand gathered to discuss the domestic politics of Iran in the year 2017 as in pertains to issues of human rights, civil society, ethnic, religious and sexual minorities. 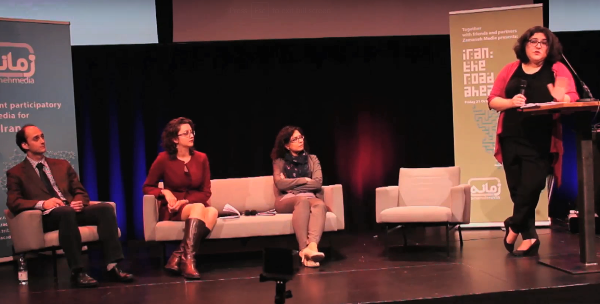 The moderator, Nazli Kamvari asked about the bulk of headlines coming from Iran everyday including factional disputes between key political figures and parties, the nuclear agreement, electoral alliances and antagonisms, issues related to freedom of information and speech, environmental concerns – particularly the water crisis in the country, human rights abuses, the state of women and minorities.

She asked the panel to weigh in this bulk of news and explore national trends or underlying tensions that they project will become fundamentally decisive in Iran’s domestic politics in the year to come. Watch the panel:

Some topics that are dissected by the panelists are: 1- the upcoming presidential and city and village council elections, 2 – the future of guardianship of jurists: the alliances and antagonism within the state and the future of the office of the Supreme Leader (the issue of succession) , 3- the role of dissidents, political, social and cultural activists and oppositions groups within Iran, 4 – poverty and economic hardships, 5- the Iranian peripheries (both symbolically and geographically) and issues of ethnic, religious and sexual minorities.

The panel also discussed how Human rights groups that are based outside of Iran try to push the Iranian state and government for greater adherence to universal human rights norms. Yet the violations of rights that take place in Iran today are far greater than the current mainstream rhetoric of human rights in Iran which often includes celebrity political dissidents, journalists, lawyers, and sometimes ethnic and religious minority groups. It so often does not include the rights of refugees in Iran including the afghan refugees, the rights of those living in poverty in the peripheries of the urban centers, the rights of citizens and refugees for free movement, the rights of criminal and those arrested based on criminal charges, environmental rights, the right to have shelter, food and health care.

The panelists discussed how the discourse of human rights in Iran can reorient itself and how European Union’s engagement with Iran on issues related to human rights (along with non-proliferation, terrorism, economic ties, etc) can help to include rights for more people.

Raha Bahreini is an Iranian-Canadian human rights lawyer and the Amnesty International’s Iran researcher; Ammar Maleki is an assistant professor in comparative politics in Tilburg University and Azadeh Pourzand is the Deputy Director of Programs at Small Media in and Executive Director of Pourzand Foundation.