An event featuring reformist speakers at Elm o Sanaat University in Tehran was swarmed by hecklers who carried yellow Hezbollah banners and threatened the speakers. 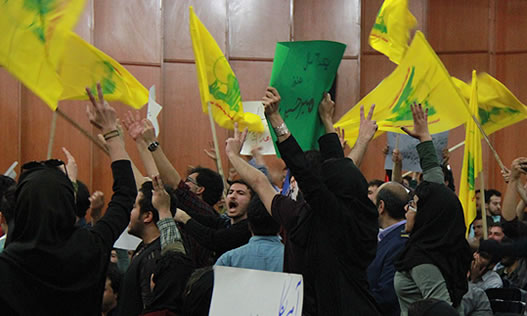 ILNA reports that at an event on Tuesday April 19, the Hezbollah supporters carried a picture of Ali Shakourirad, the Secretary General of the Iranian Nation’s Islamic Unity Party, the newly formed reformist party, and it was captioned “Wanted: Dead or Alive!”

Shakourirad was referred to as the “seditious organizer of Ashura”, referring to one of the eventful election protests of 2009 against the victory of Mahmoud Ahmadinejad, which was tainted by allegations of vote fraud.

Shakourirad said in his speech: “Under the former administration, critics were sidelined; civil society groups were diminished and opposition newspapers were shut down. The result was the looting of the country, which not only degraded the conservatives but discredited the Islamic Republic regime.”

Since the Rohani administration has taken over, several charges of corruption at various levels of government have been laid and pursued by the judiciary. The most prominent case is that of billions of dollars allegedly embezzled from the Oil Ministry.

Ebrahim Asgharzadeh, another reformist, was threatened with assault when he told his audience President Rohani should be thanked for disposing of the nuclear dispute and then criticized the former administration.

Rohani accused of folding to U.S. during nuclear talks