Jailed Iranian human rights activist Nargess Mohammadi has finally been allowed to contact her children after 10 months in Evin Prison. 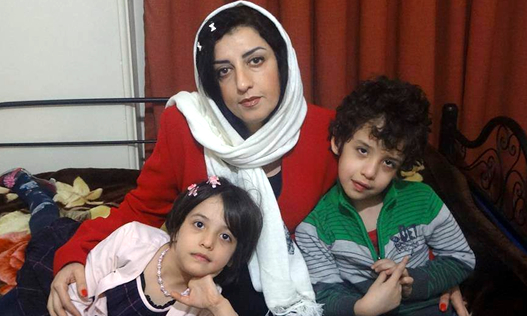 Mohammadi was forced to send her children abroad to France to stay with their father when she was summoned to serve out her sentence, despite having received an earlier exemption for medical reasons.

The Centre for Human Rights Defenders reports that Mohammadi was allowed to talk on the phone with her children on April 2 but she was denied the right to speak to her husband.

Rahmani says Mohammadi has already served a third of her six-year sentence and, in view of her medical problems, she could be found legally eligible for release.

The judiciary, however, has filed new charges against Mohammadi, and she is scheduled to face them in court on April 21.
Mohammadi’s six-year sentence was reduced from the preliminary court sentence of 11 years, based on charges of “assembly and collusion against national security, membership in the Centre for Human Rights Defenders and propaganda against the regime”.

Rohani adviser in trouble for comments about Sistan-Baluchistan