Hassan Khomeini, the grandson of the late leader of Iran’s Revolution, Ayatollah Khomeini, has registered his name for the Assembly of Experts election. 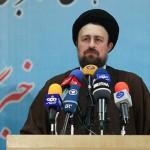 Registration opened yesterday for the fifth Assembly of Experts election, which is slated for March 2016.

Hassan Khomeini told reporters that his decision to run for the Assembly of Experts has drawn three kinds of reactions.

The first group has been very supportive and told him that his participation is “a sign of the persistence of Imam [Khomeini] in Iranian society”.

The second group has been highly critical, and to them Khomeini said: “I am very grateful for your candid opinions.”

Hassan Khomeini has been often been criticized by Islamic Republic hardliners for his proximity to reformists and his support for the election protests of 2009.