The chief environmental official for Western Azerbaijan Province reported on Sunday December 6 that 700 square kilometers of the southern parts of Lake Urmia are now covered with water. 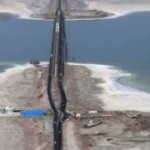 The Mehr News Agency reports that according to Parviz Arasteh, the chief causes of Lake Urmia’s resurgence have been increased precipitation, the dredging of rivers and main entries to the lake and the linking of the Zarinneh River and the Simineh River.

Arasteh added that that depth of water in the southern area of the lake is between 12 and 20 centimetres, explaining: “With 90 million cubic metres of water from rivers and direct precipitation, the water surface has now increased to about 1,100 square kilometres.”

He stressed that channelling the Zarineh River into the Simineh has been the most effective step in the replenishment of Lake Urmia.

A budget of 3.5 billion toumans has been reportedly allocated to cover 4,000 square kilometres of Lake Urmia with water and protect the regional environment. Arasteh stated that last year, 4 billion toumans was spent on mulching, the construction of ponds on the islands and combating dust particles.

The replenishment of Lake Urmia, Iran’s largest inland lake, is the biggest challenge facing the Iranian government in the context of the countrywide water crisis that has plagued the country in recent years.