The Organization of Petroleum Exporting Countries (OPEC) agreed at its 168th meeting to increase the cap on oil production to 31.5 million barrels a day. 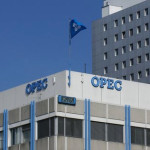 Reuters reported on Friday December 4 that the OPEC announcement drove down the price of Brent Crude nearly two dollars a barrel to about $43.

At the last OPEC meeting, the cap was set at 30 million barrels a day, and analysts had speculated that the current meeting would bring no change or even a decrease.

With the lifting of international sanctions, Iran has been looking to increase its oil exports so it welcomes the increase in the OPEC cap.