Samieh Tahmasbi, the head of the National Trust Party’s women’s branch, says it is aiming to capture 30 percent of parliamentary seats in the coming election. 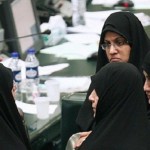 Tahmasbi told the Mehr News Agency the number of women MPs “is not befitting of Iranian women and this number cannot provide women with their demands.” There are currently nine female MPs in the Iranian Parliament.

Tahmasbi said they hope that the Guardian Council does not deny eligibility to female candidates and that “active and experienced” women can find their way to Parliament in March.

Reformist organizations are seriously concerned that the Guardian Council, which is dominated by hardliners, will prevent reformist candidates from running in the election. The Guardian Council is responsible for determining the eligibility of candidates.

Fatemeh Hashmi Rafsanjani told ISNA that if women find their way into Parliament, “clearly it will help reduce gender discrimination and lead to positive change in legislation.”

Eighty women in total have been elected to Parliaments of the Islamic Republic, and the fifth Parliament had the highest number with fourteen.