Majid Azarpey and Ali Shariati, two reformist political prisoners currently held in Ward 8 of Evin Prison, began a hunger strike last Thursday November 5 after addressing a letter to President Hassan Rohani, indicating that they will not end their strike until their cases have been submitted for review. 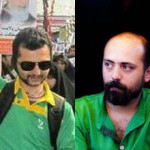 The two political activists write: “Unfortunately, our efforts in support of the government of ‘wisdom and hope’ did not sit well with the security charge fabricators who have slapped us with a long list of false charges in an attempt to discourage your young supporters.”

The letter criticizes Rohani and his administration for “weakness in the areas of justice and intelligence”.

The two urge the Rohani administration to speak out against “extremists in the establishment and their false charges”.

In September, Ali Shariati was sentenced to over 12 years in jail for “assembly and collusion, propaganda against the regime, insulting the leader and having a satellite dish”.

Majid Azarpey, a member of the reformist National Trust party, has been held in prison without any formal charges for over five months.