A complaint has been filed against the head of Iranian national broadcaster Seda va Sima, Mohammad Sarfaraz, for the controversial program Fitileh, which has triggered widespread protests by the country’s Azeri community, who feel insulted by the program. 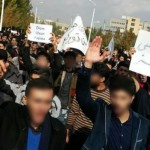 ILNA reported on Tuesday November 10 that Iranian lawyer Jafar Afsharnia has filed a suit at the Culture Media Court against Sarfaraz as well as the program’s director, Mohammad Moslemi, and producer Alireza Aghai.

The program features a comedy sketch of an Azeri father and son at a hotel mistaking a toilet brush as a toothbrush.
The three people named in the suit are accused of “insulting and disturbing the public”.

Afsharnia also reports that another complaint is being filed by Maragheh MP Mehdi Davatgari.
Seda va Sima has issued a public apology for the program but that has not silenced the protests.

Reports from Azerbaijan provinces indicate that the protests on Monday were met with resistance from security forces, which led to the a number of injuries among the protesters.