The spokesman for Iranian judiciary has denied that people linked to social networking sites in Qazvin have been arrested. 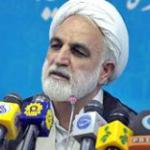 Gholamhossein Mohseni Ejei said on Sunday November 8 that reports of arrests in Qazvin are not true, adding: “I contacted the prosecutor and he told me he has not heard of such a thing.”

Asked if membership in a Telegram network linked to the British government would be considered a crime, the spokesman for the judiciary said these networks “have never had any positive intentions regarding Iran” and recommended that users should beware.

The Tasnim news agency linked to the Iranian Revolutionary Guards (IRGC) reported yesterday that the managers of 180 different social networking groups using mobile services in Qazvin had been arrested. The report added that the charges involved the posting of pornographic material and material deemed “counter to moral security”.

Mohseni Ejei was also asked about the recent arrests of journalists and responded that the detainees were not all journalists.

In recent weeks, a number of journalists, including Issa Saharkhiz, Ehsan Mazandarani and Afarin Chitsaz, were arrested and accused of links to “enemy infiltration plans”.

The Iranian president reacted to the arrests, saying the Iranian Supreme Leader’s use of the term “enemy infiltration” should not be seen as an excuse to silence the opposition.