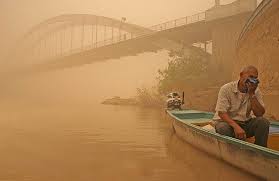 The Tasnim website reported on Thursday that according to Golestan Hospital in Ahwaz, the individual checked into the hospital yesterday with severe respiratory complications.

The report adds that heavy dust and acid rain sent scores of people into emergency rooms in Ahwaz on October 28. Of the 110 that arrived at Golestan Hospital, eight were hospitalized and two had to be intubated. Hospitals in Ahwaz go on alert whenever heavy dust storms or rains are predicted.

In other regions of the province a total of close to three thousand people reportedly visited the emergency with respiratory problems triggered by acid rain.

Khuzestan province is facing serious challenges with dust storms and increased dust particles in the air that restrict breathing and vision. The city has had to shut down on occasion due to the severity of dust storms.

The Department of the Environment has been quoted as saying that the people of Khuzestan have to learn to live with the problem of dust particles as it cannot be easily resolved.

The dust storms are said to be blown into Iran from Iraq and Saudi Arabia and exacerbated by land erosion, a lack of rain and a lack of mulching projects.