A group of Iranian pop music artists has written an open letter to President Hassan Rohani to protest their discriminatory treatment by the Ministry of Culture and Guidance. 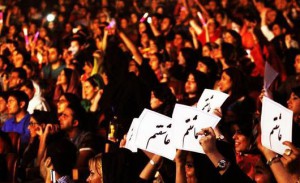 They write that their music is regarded by the ministry as “shallow” compared to traditional music and this view has resulted in rejections and refusals for concert and distribution permits.

The letter adds that pop musicians are not allowed to perform in large and historic venues and at best only get permits for small music halls.

A spokesman for the Ministry of Culture said recently that Iranian musicians should refrain from collaborating with foreign media and should not allow their music to be aired on their programs.

The letter reminds the ministry that according to Article 169 of the constitution, they are well within their rights to have their music used in foreign-based media like Radio Javan.