The Abadan representative in Iranian Parliament says two million palm trees in Abadan are on the verge of destruction due to the rise in salt levels in the water. 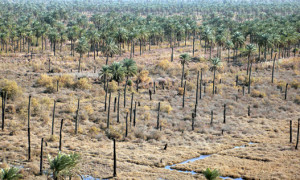 Javad Sadoonzadeh told IRNA: “The destruction of streams, a salt imbalance in agricultural waters and a lack of drainage is posing grave danger to the palm population of the peninsula.”

Palm tree farmers intersperse that crop with citrus trees, according to the Abadan MP. But an unprecedented rise in mineral levels in the water is now putting an end to their agricultural activities.

The Abadan MP called for the construction of a protective dam to control the seepage of salt water into the agricultural lands of the region.

Currently, Abadan has 12,000 hectares of palm trees. Fifty percent of Iran’s date exports are provided by the palm groves of Khuzestan, which employ 250,000 people in the province.