A number of Basij students staged a sit-in in front of the Iranian Parliament to protest the nuclear agreement reached between Iran and the 5+1, as well as the Iranian foreign minister’s meeting and handshake with U.S. President Barack Obama. 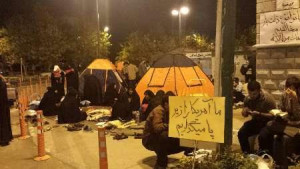 On September 28, Iranian Foreign Minister Mohammad Javad Zarif and Obama met in the corridors of the UN headquarters and shook hands following a short exchange. World leaders from around the globe have been in New York to attend the annual UN General Assembly.

ISNA reports that the sit-in has now gone into its second day and the protesters spent the night in 10 tents set up in front of Parliament.

Alireza Zakani, an Iranian MP and member of the parliamentary commission reviewing the draft of the nuclear agreement, has also spoken out against the foreign minister’s greeting of Barack Obama, saying Parliament should not ignore this incident.

He says the handshake is “a deliberate attempt at normalization of relations with the U.S.”.
Conservative factions of the Islamic Republic have been unrelenting in expressing their concern over every diplomatic effort by the Rohani administration to normalize international relations.