A spokesman for Iran’s Pilgrimage Organization reports that the number of Iranians killed in the crane accident at Alharam Mosque in Mecca has now reached 11. 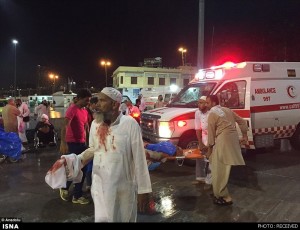 ISNA reports that on Tuesday September 15, Hamid Mohammadi said investigations have confirmed that three female Iranian pilgrims were killed in the incident and the total number of Iranians killed now stands at 11.

Maryam Altaha Banab, Fatima Begum and Kobra Damghani were identified by the Iranian official as the three women killed in the incident. The three had been missing since the accident.

Mohammadi said that identification of the victims has been difficult due to severe disfiguration.

Meanwhile, 32 other Iranians were injured in the accident and 25 of those have already been released from hospital.

On September 11, a crane collapsed at the site of Alharam Mosque only days after the start of the Haj ceremony. One hundred and seven pilgrims were killed by the crash and 238 wounded. Many of the victims are said to be Pakistani and Indian.

Iranian officials have spoken out against the Saudi government’s handling of the Haj Ceremony, and a number of Iranian MPs have called for the ritual to be handled by the Organization of Islamic Cooperation.