The Blue Lids campaign, which was launched only two weeks ago in Sanandaj to collect plastic bottle lids as a fundraiser to provide wheelchairs to the disabled, has picked up momentum, with other cities joining the campaign even in other provinces. 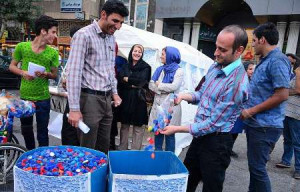 IRNA reports that the Raad Charity Organization in Sanandaj launched the Blue Lids Campaign on September 1 to provide wheelchairs for the disabled, and now several other cities have coordinated with the campaign, establishing depots for dropping off the lids people have collected.

Campaign director Amanj Fallahi credited social media for the growing and totally spontaneous response to the campaign, which has been much greater than anticipated.

The report adds that since retrieving lids is much cheaper than manufacturing them, companies are highly interested in obtaining the lids collected by the campaign, and in view of the charity campaign, some have agreed to pay a slight premium above the market price.

Falahi stressed that one of the chief objectives of the campaign is to promote a sense of responsibility toward the disabled as well as the environment. “This campaign has no time limit, and we will continue to collect plastic lids,” he said.

Last year, the president of the Society for the Protection of Persons with Disabilities said buses, planes and trains in the country have no provisions for the disabled, and attractions and hotels in Iran are similarly lacking in facilities for the disabled.