Administration gets “warnings” from seminary teachers

The head of the Supreme Council of Seminaries says the Society of Seminary Teachers of Qom has given certain “warnings” to the president, the minister of culture and the head of national broadcaster Seda va Sima. 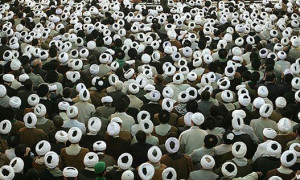 Morteza Mohgtadayi told Khabaronline on Friday September 11 that the society has sent classified recommendations to the minister of culture and even the president, adding that the administration has issued orders in view of some of the recommendations.

He added that he has also summoned Seda va Sima officials to question them regarding certain films and program choices.

Moghtadayi had said earlier that Iran’s Supreme Leader has asked the Society of Seminary Teachers to monitor the actions of the Rohani administration and take them to task for their decisions.

Under the Rohani administration certain cultural activities such as book publication, film screenings and stage productions have been cancelled despite initially receiving permits from the ministry of guidance. Meanwhile some concerts have been similarly cancelled.

Efforts of the Rohani administration to end the ban on the presence of women in stadiums as spectators were also derailed by pressure from the clergy.

Ali Jannati, the minister of culture has however denied these influences saying: “I do not act under pressure from the media or statement from certain MPs regarding the cinema. I simply act in accordance with our regulations and am not influenced by anyone.”

The efforts of the Rohani administration to implement more progressive and relaxed policies have been continuously targeted by the conservative factions of the government, which accuse it of “deviating from the path of the Revolution”.