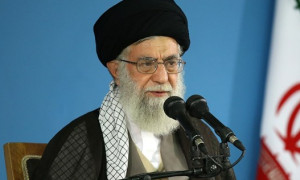 In a speech on Wednesday September 9, Ayatollah Khamenei stressed the importance of the approaching parliamentary elections and maintained that all elections under the Islamic Republic regime have been legitimate and without reproach.

“Elections in Iran have been held to the the healthiest and highest standards, but unfortunately some inside the country are taking steps which sully that image, and even before the elections are held, they are expressing concern about vote fraud,” Ayatollah Khamenei said.

Iran’s Supreme Leader emphasized that he has “protected” the people’s votes in all elections, pointing to the 2009 presidential election as an example, saying: “We completely supported the outcome of the election, whatever it was.”

The 2009 presidential election led to widespread mass protests for close to a year, as many Iranians, including two of the candidates running in the election, questioned the legitimacy of the vote count. Ayatollah Khamenei refused to allow a recount; instead, protesters were met with state violence, scores of people were killed and many more arrested.

MirHosein Mousavi and Mehdi Karroubi, the two candidates who questioned the legitimacy of the 2009 election, have been under house arrest since February 2011.

Ayatollah Khamenei said the Guardian Council’s role is to guarantee the health and transparency of the elections.

Reformist and progressive factions in the Islamic Republic have repeatedly questioned the impartiality of the Guardian Council in determining the eligibility of candidates in the various elections. The Guardian Council, which has a highly conservative membership and a hardliner as its chief, has often been accused of screening out progressive nominees from running in elections.

Hassan Rohani has been pushing to limit the role of the council in a series of speeches while insisting on greater decision-making powers for the Ministry of the Interior as the body that actually runs the elections. His efforts have attracted harsh criticism from hardliners and have now been completely shot down by the leader of the country, who in practical terms has the final say in all matters in the Islamic Republic.