Fire at an animal shelter near Eshtehard led to the death of 200 cats and the owner and operator of the shelter. 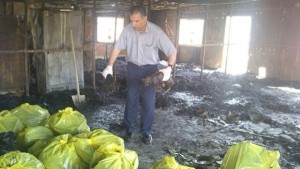 A spokesman for the local fire department reports that the fire occurred at 6 AM, killing one person and 200 cats.

Yousef Alimirza said the centre was a grassroots operation giving shelter to abused or hurt animals.

The individual killed in the fire was reportedly 60-year-old Sholeh Raofi, who cared for and treated the animals. Raofi was killed by smoke inhalation, according to the report.

The Tabnak daily reports that some animal rights activists say the fire might have been intentional. The official cause of the fire has not been announced yet.

A lawyer for the Raofi family told Khavaronline that Sholeh Raofi had received threats and some neighbours were not keen on rescuing the animals during the fire. He added, however, that the threats had involved filing complaints and attempts to get the local government to close the centre. Preliminary reports have pointed to electrical malfunction as the cause of the fire.

Sholeh Raofi reportedly started the animal shelter 10 years ago and later moved into the shelter and also used it as her own residence, alongside the 350 cats and 12 dogs that reportedly lived at the centres.

The fire comes five days after a dog shelter in Varamin was attacked by a group of assailants carrying machetes. The owner and operator of the shelter, Haleh Boromand, was injured in the attack.