The closure of 410 stone-cutting factories in Fars Province has resulted in more than 4,500 workers being laid off. 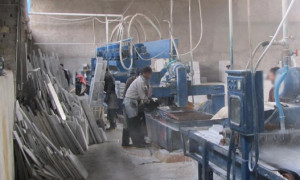 The closures were caused by a combination of disputes with Tax Revenue Offices, rising energy prices and budget shortfalls, according to the Tasnim News Agency.

Stone-cutting factories had closed their plants in the past year and filed complaints regarding the calculation of the value added tax, but later reports indicated those disputes were resolved.

It appears, however, that the government has reverted to the earlier system of taxation, triggering new disputes with the stone-cutting factories.

In Neyriz, another 250 units were closed and 2,500 workers are now unemployed.