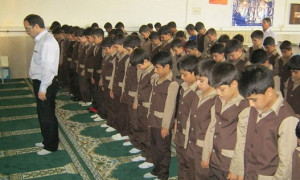 According to a report on the Tasnim website on August 12, Minister Ali Akbar Fani said: “The ministry is focused on promoting school-based education and one of the examples of school-based teaching is for the principals to focus on mass prayers.”

He added that 19,000 members of the clergy and 30,000 “cultural assistants” currently lead mass prayers in schools.

He added that the presence of the Friday Mass Imams of the cities could also be a good incentive for children to get involved in mass prayers and build the habit of daily prayers.

He added that mosques near schools could also be used to reinforce prayer habits.

During the presidency of Mahmoud Ahmadinejad, the government launched widespread policies to further inculcate Islamic values through school teaching and curricula. The policies remain mostly intact under the Rohani administration.