Environmental activists formed a human chain around Palang Dareh Forest on Thursday July 30 while the head of Iran’s Department of the Environment, Massoumeh Ebtekar, was visiting Mazandaran Province in northern Iran to mark National Forest Day. 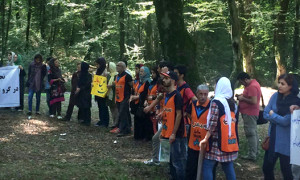 The human chain, which brought together members of 43 grassroots environmental groups, called for a stop to the exploitation of forests. They also called for the strict implementation of government regulations for the protection of Hirkani forests.

Iranian forests are disappearing at an alarming rate for many reasons, including: widespread wildfires, pests and diseases, too much tree harvesting and the development of agricultural land.

Ebtekar met with protesters and assured them that the bill to criminalize any form of tree-cutting is about to be passed in Parliament. She also spoke of a new forest protection bill being drafted by her department for presentation in Parliament.

She added that the new bill aims to stop commercial exploitation and the illegal harvesting of forests and smuggling of wood, and the Ministry of Agriculture as well as the head of Parliament have expressed support for it.