Iranian Parliament has voted in favour of establishing a special commission to review the nuclear agreement finalized last week in Vienna between Iran and the 5+1. 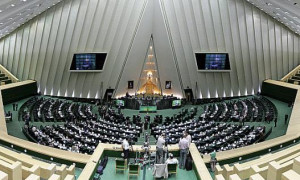 The motion passed with 136 MPs in favour, 29 against and five abstentions.

Ahmad Amirabadi, one of the chief drivers of the motion, said certain issues regarding the agreement need to be reviewed. The motion to establish the special commission was submitted to the parliamentary speaker with 21 signatures.

The move comes after the United Nations Security Council voted to drop existing resolutions against Iran and adopt the provisions of the new agreement, which states that in exchange for the checks and limits on Iran’s nuclear program, all international sanctions against the country will be dropped.

Iranian Foreign Minister Mohammad Javad Zarif had appeared earlier in Parliament to defend the agreement, stressing that the word “suspended” is not used in reference to the sanctions and approval by the UN Security Council means sanctions are lifted.

He maintained that the deal’s greatest achievement is the UN confirmation of Iran’s right to enrich uranium.

He further maintained that the restriction on missile activities is non-binding and that firing a ballistic missile is not a violation of the agreement.

IRNA reported on Tuesday that Zairf told MPs that he does not claim that the agreement is one hundred percent in Iran’s interest, adding that in order to get what they wanted, negotiators had shown some flexibility.

“As much as possible, we have tried to comply with most or all of the red lines,” Zarif said.
“The acceptance of Iran’s right to enrichment, preserving the nature of the Arak facility, no inspections of missile and military programs, no access to non-nuclear facilities, the cancellation of all financial and economic sanctions and security Council resolutions,” were listed by Zarif in Parliament as the red lines observed by his team in the negotiations with the 5+1.