All 18 Iranian MPs who represent Fars Province quit their posts and walked out of an official session of Parliament to protest the appointment of a new Fars governor. 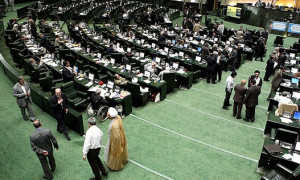 IRNA reports that the MPs walked out on Sunday July 12, after discussions in Parliament about the new appointment failed to reach a conclusion and they demanded the impeachment of the interior minister.

The Ministry of the Interior has not confirmed Asghani’s appointment, saying it has been proposed but not yet approved by cabinet.

Mohammadreza Rezaio Koochi, the Jahrom representative, says they resigned because none of their own suggestions for the position were selected by the government; instead, a non-native of the province is being appointed.

An interior ministry spokesman said the ministry’s proposal has not yet been approved by cabinet but it has already been endorsed by the intelligence ministry.

The previous Fars governor, Mohammd Ahmadi, resigned his position in order to run for a seat in Parliament in the coming election.

The replacement proposed by the interior ministry, in addition to his reformist past, is also an experienced governor; he served as Khuzestan governor and was recognized for contributing to development in the province in 2004.

The Fars MPs who resigned today are all from the conservative Principalist faction that opposes reformists.