The Iranian president’s advisor for Women and Family Affairs says one third of Iran’s homeless are women. 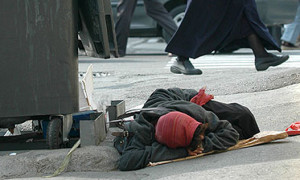 ILNA reports that according to Shahindokht Molaverdi, 5,000 of the 15,000 homeless in the country are women, adding that these statistics are documented and should not be interpreted as “blackwashing” the system.

Molaverdi called on the 13 government organizations that could address the problem of homeless women to “speed up” their efforts to remedy the situation. She added that her office is making every effort to coordinate the action of those 13 government bodies.

The first shelter to help homeless women was established in 2007 by a non-governmental organization, Tavalodi Digar, with public health support on Tehran’s Molodi Street under the name of Garmkhaneh.

In February of 2011, the Social Welfare office confirmed that homelessness among women was on the rise. The following year it was announced that women as young as 20 were now among the homeless.